Flood relief
On Sunday the eleventh of October SEDS went to Santa Juturu near Nandyal in the Kurnool district of Andhra Pradesh to help the victims of the devastating floods. After a drought which was the worst in 50 years the states of Andhra Pradesh and Karnataka got hit by the worst floods in a 100 years. The numbers speak for themselves. More than 250 people died. 10 million people had become homeless, nearly two million houses were destroyed. Half a million people have taken refuge in relief camps. Thousands of livestock have perished and vast tracts of agricultural land are under water and crops have been destroyed.

How it begun
In the light of these events some staff members of SEDS wanted to take up relief work for these victims. On Wednesday, Rabani planned to donate some money and make a 1000 chappatis to hand out in the disaster area. A simple collection on the SEDS farm already made 12.000 Rs.
That day, there was also a Mandal meeting. The idea of collecting goods and money from each of the Mandals was put forward. The staff was very enthusiastic about the idea and went to work. The word spread, from all the villages and towns in the area where SEDS is active gifts came in. Mainly rice, money and clothes were donated but also oil, chillies, blankets, mats, millet, etc.
In a space of four days SEDS collected Rs. 44.420, 2020 kg of rice and a truckload of clothes. 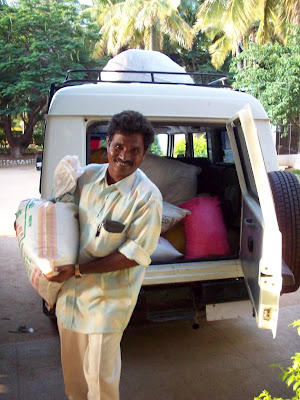 The only thing left to do was to choose a village where relief was needed. The first place considered was Kurnool city but many relief teams were already busy there. Thanks to the C.I. of Police of Penukonda we got the news that rural areas outside Nandyal were left behind in the help. Santa Juturu was designated as a place that had not yet received help so we went there

Packing the goods & transport
To ensure an easy delivery at the place of the disaster the rice was sorted in small sacks of five kg. Some sacks got an extra ration of chillies. To be sure that the rice would not be spilt the sacks got an extra cover, a work that only ended at eleven thirty on Saturday night. 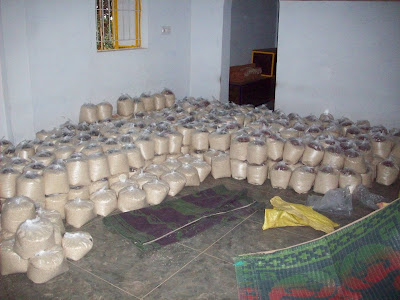 Another job was packing the clothes SEDS got. SEDS staff, people from the office, the girls from the tailoring centre, the hostel children, everyone got involved into the action.
The loading of the trucks began on Saturday afternoon, first the clothes. Due to a delay of a hired Tempo truck the rice bags were loaded at three O’clock Sunday morning. 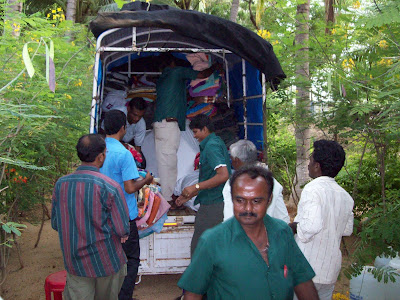 On our way
The team left the farm by four o’clock. An early start was a necessity because of the long trip ahead. The SEDS team consisted of K.Venkateshwarulu, Shankarappa, P.Sunitha, Hussain Govindamma, Rabbani, Jyothi, Prashanth, Anand, Nagabushna, Venkataramudu, Adinarayana, Gyadrappa, Sridhar, Bhaskar Reddy, K.A.Nagaraj, Iris, Filip, Vishal, Anneleen, Rashna, Narayana, Nagaraj and Melvin. In total it was an eight hour trip. 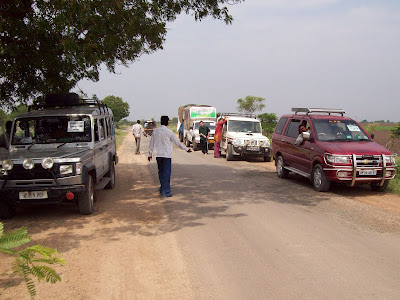 Despite the righteous nature of our undertaking we weren’t spared some little problems which cost us time. One of the vehicles got two flats and when we almost arrived at our place of destiny, we were delayed for another hour because of a sit-in by some women of a nearby village. They were protesting against the lack of help. It seemed we came to the right place. 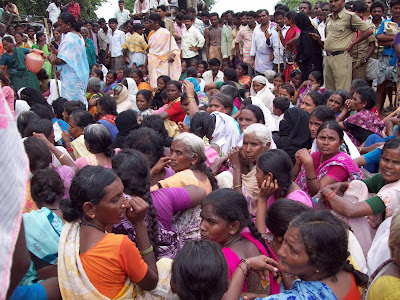 Every disadvantage has it advantage, and to make the best use of the lost time tokens were made for the rice handout. 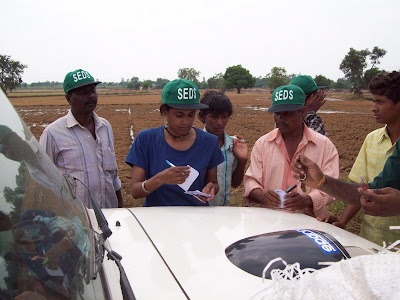 Around us the damage of the floods was clearly visible. 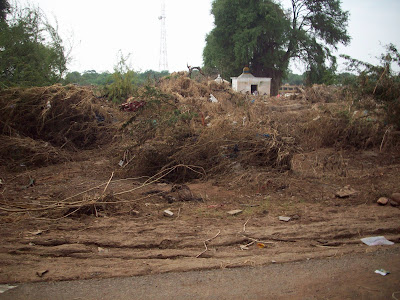 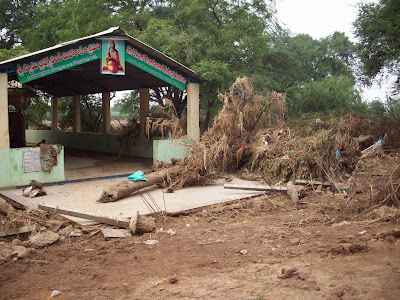 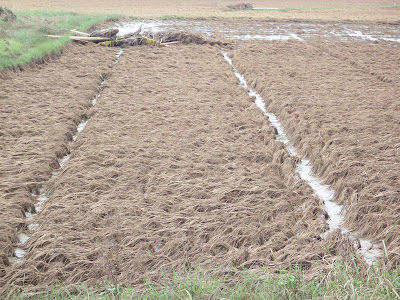 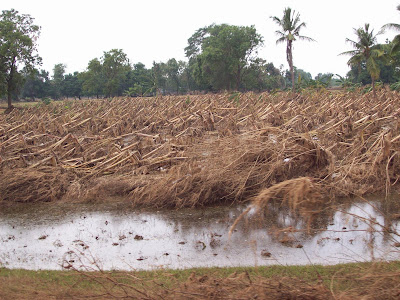 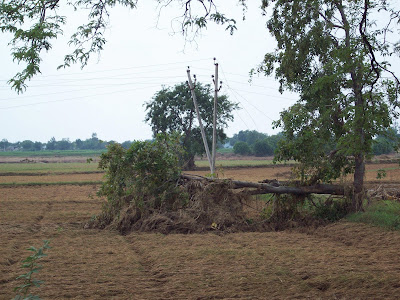 Santa Juturu
We arrived at Santa Juturu around noon. The road to the village was washed away but restored temporarily. Immediately upon arrival we were confronted with the villagers who had a lot to tell us about their situation. 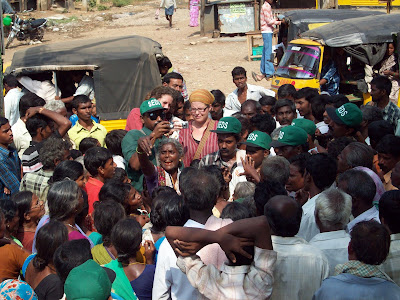 The village consisted of a little centre with rural communities around it. In order to have a safe place for the relief goods a local storeroom was used for temporary hoarding the provisions. 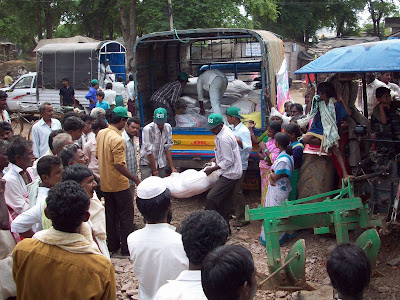 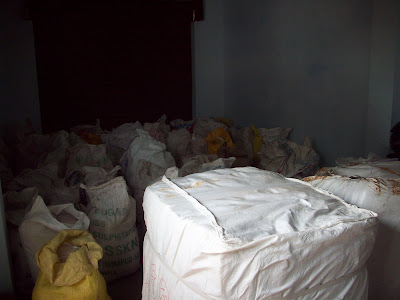 Survey of the surrounding communities
Instead of simply dumping the food and clothes in the village the team took a survey in the nearby communities. The places we visited were not to badly affected by the floods. The water had stood knee high, so maybe not as devastating as some of the images shown in the media. But this did not mean that the communities were not affected. Many people had lost their provisions when the water came into their houses. Every house was visited, there was a short assessment of the damage and questions were asked regarding the family. Based on this tokens were handed out to the families. 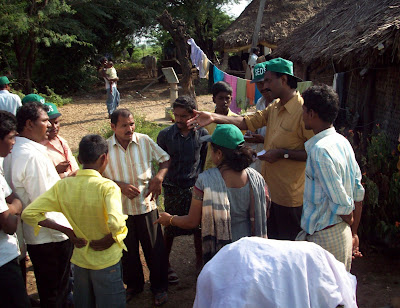 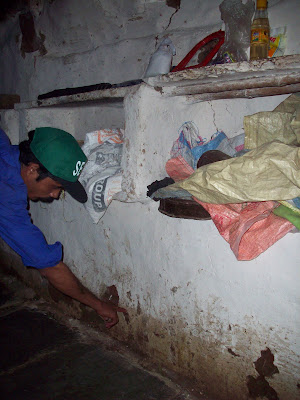 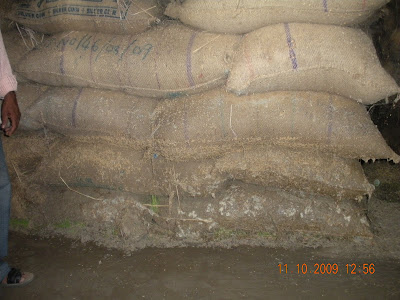 Some of the communities were very poor, with more than 80% of the houses consisting of simple straw huts. We tried to help as many people as possible but in the end of one survey we were confronted with the bitter side of relief work. In one community there were not enough tokens to hand out so some families were left behind. 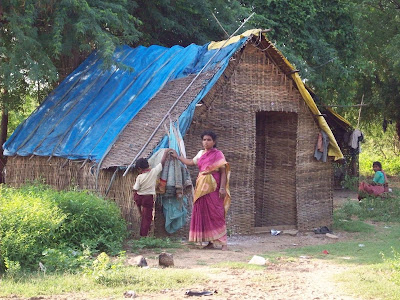 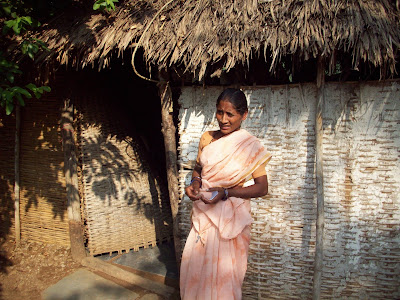 Distribution of the goods
At four thirty, the distribution of the relief goods began. The crowd was not too big but now and then the scene became very hectic. People were scrambling to come first and there was a lot of pushing and shoving. In the end the staff did very well in handling the crowd, showing patience and force in a balanced way. 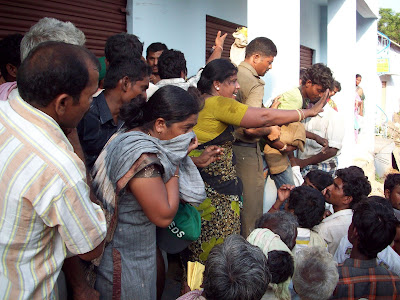 Conclusion
By the end of the day everybody was very tired but satisfied with a job well done. SEDS and the communities of Gorantla, Chilamathur, Somandepalli, Penukonda and Roddam had helped 514 families of the rural area of Nandyal with food and clothes. 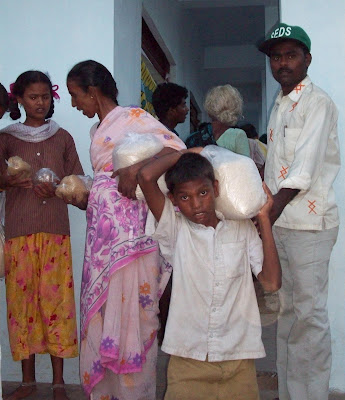 After the intervention the team was invited to have a chat with the Police Chief of Nandyal. The man was very thankful to SEDS. There was a lot of respect towards our way of working. Many relief teams come in and just dump their goods, hoping that the local people will take care of a proper distribution. But often these goods are not given to the people who need it the most. Allocation takes place along party lines or caste. SEDS’ approach of door to door visits was admired a lot because we handed our goods to the needy and we didn’t look at politics, caste or creed.

So a big thank you to the staff who worked without rest for five days and who made this relief operation possible!!!

Posted by administrator at 11:26 AM