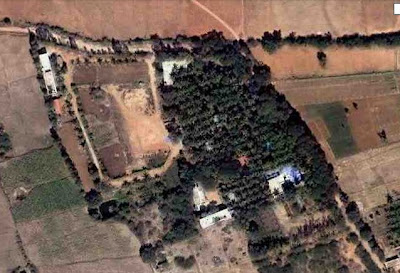 On 01/12/09 P.S. Prasad, Vishal Ananda and Filip Tetaert went for a field visit to get a thorough understanding on how the biogas units need to be installed and what possible problems SEDS might face. In total, we visited three villages under the guidance of C.Babu form ADATS. 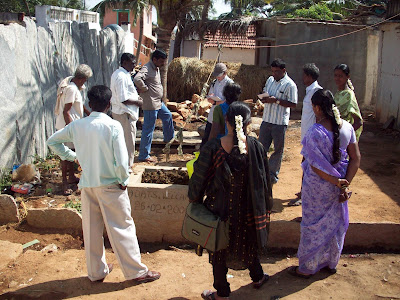 The first village which was Konduuvlahali We saw some units that already have been operating for three and a half years. In an interview with the beneficiaries we found out that they were very happy with the installations as it has saved them lots of time from going out and sourcing for firewood.
The first family acknowledged that they still were using firewood. The biogas unit was able to provide in the cooking of the meals but it was not sufficient enough to boil water for washing. The reason for this is that they only have one cow and were not able to get a higher output out of their unit. Each unit requires at least 10kg’s of dung for per day. During the demonstration we saw that the dung needs to be mixed up with water until you get a good liquid mixture. Also other types of (bio) fuel such as rotten vegetables and fruit were used. 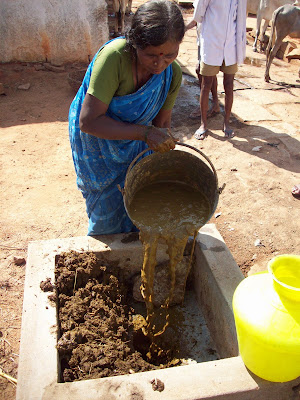 The second house we visited had five cows, as a result of this they were able to feed their digester in the morning and the evening and meet all their requirements with biogas. After this we met with two families whose digesters were located at a distance of 100 to 200 meters away from the house which is because of the limited space in and round their compound. This showed us that this does not effect the pressure of the gas that needs to travel trough a heavy duty rubber hose straight into their kitchen.

During the mandatory tea, we had a chat with the owners. Interesting to note was the heightened sense of status that the owners of the biogas units had. In the past only rich members of the community were able to purchase and use LPG gas tanks. Now these poorer people are able to use gas and their status has risen in the village. Also the biogas was seen as a much better alternative to firewood then the LPG Tanks. One does not have to go to the city for refilling and the danger of explosion is not there.

In the second village, Korepalli and the third, Choutakuntahalli, we saw the excavated pits where the biogas units would be installed.
The duration for digging a pit varied from three to five days according to the people who were able to work on it and the type of soil. It was noted that families who signed up for the program were helping each other in the digging work. These pits measure are about 6 feet wide and about 5 feet deep in a round shape. 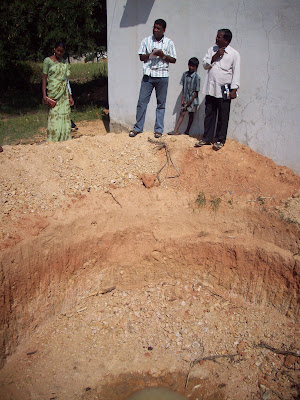 In the end we sat down with C.Babu and reminisced about the day. He pointed out to us that the biggest problem in the beginning will be the placement of the unit. People will discuss about which ground is theirs so a proper marking should be done and all parties considered should get a voice in this so that future discussions can be held to a minimum. 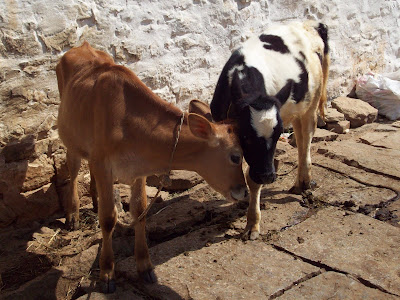 Posted by administrator at 4:49 PM