Every month you can follow the news on the farm written by the SEDS hostel children on: http://www.globalseds.blogspot.com/
Enjoy!
Posted by administrator at 6:28 PM

For video's of SEDS
1 Address
http://www.youtube.com/user/ronnyalma#g/u
Posted by administrator at 11:29 AM

On 14th of November we celebrated Children's Day. On this day India remembers the birthday of Nehru, its first prime minister after Independence. Nehru said: “Children are like buds in a garden and should be carefully and lovingly nurtured, as they are the future of the nation.” This is what we try to do with the school in SEDS everyday. We started the day as usual at 8.30h with the pledge of allegiance. Then there were speeches of the headmaster and one of the teachers. Also two children came forward to say something in honour of Jawaharlal Nehru. 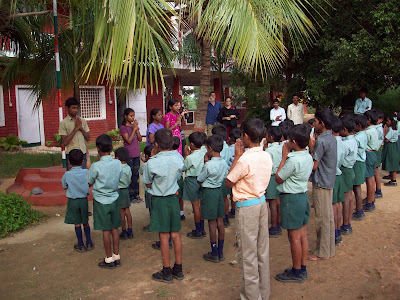 It was a beautiful day, we had a blue sky, the sun shining bright. In the morning the teachers and volunteers had organised different games for the children. They were split up in age groups and competed in all sort off disciplines. There were running games, ball games and many other sports. Some kids were more competitive than others, but everybody was having fun. The best time we had with the water games. We had balloons filled with water which we used to play volleyball and rugby. Off course the balloons burst and it didn't take long for everybody to get very wet. Finally the teachers and volunteers played a volleyball game, cheered on by the children. After such an intensive morning everybody was very hungry and we had a lunch break. 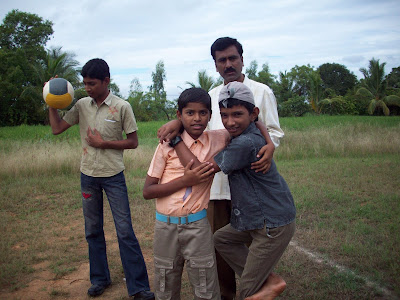 In the afternoon it was time for a little drama. In the week before Children's day, all the classes had prepared something. Now they were excited to show what they had learned. The smallest children performed a song called “Clap your hands”, clapping their hands and stomping their feet. They were adorable.
The children from the first and second class had prepared a very beautiful play called “What do you want to be”. The message they send was that you can become whatever you want but you should have the right motivation. You should not become a doctor to earn lots of money, but because you want to heal the sick. You should not become a teacher to have power over children, but to learn them valuable things. There was a lesson for all of us.
The play of the children from class 3 and 4 was situated in the courtroom. Justice prevailed, they solved the case of a stolen chicken and the lying thief was caught. 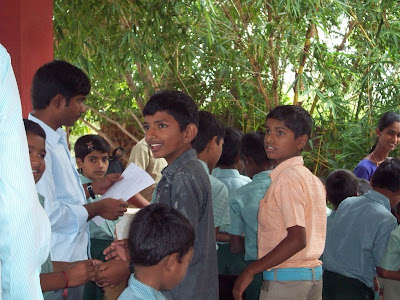 The final performances of the day were by one of the older students and the PT teacher. They each did a dance before the whole school. We all watched them together. So, another great day at SEDS came to an end.

Meanwhile there was a Painting and Essay Contest in Penukonda. SEDS was represented by the classes 7th, 9th and 10th. The participants were: Raj Kumar, Deepa, Madhan, Ramanjinamma and Teja. At the end, they all got a certificate of succeeding and participation and had delivered good work! 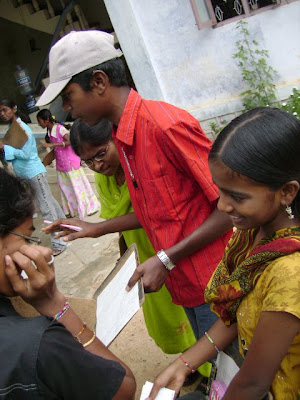 Posted by administrator at 5:15 PM

'The frame of the book is finished, now it's matter of finding time to write it.' While saying this, Manil looks at me. In her eyes I can read her thoughts, thoughts on hundreds of stories that she has collected in her mind, and that one day deserve to find their way on paper.
I am sitting around the table, having a cold beer, caressing one of the dogs, enjoying the nice evening breeze, and wondering how the farm looked like thirty years ago, when everything started - like all modest but heroic stories - from nothing... I can only believe her words, and those of her beloved husband - and I do - and thinking of the picture that I saw in the office: a piece of waste-land, a little house and a couple of trees. This could have remained a forgotten piece of land, somewhere in the middle of South India, that travellers definitely would have avoided on their trip from South to North. But it isn't. Thanks to two people, Rajen and Manil, their ambitions, their ideals, and maybe the most important, the love and respect for each other, this place has become one of these small paradises on earth, that I can enjoy, right now, far away from home, without having planted one tree nor flower seed, without having put a brick one on the other to build a decent house, a school, a hostel, a production house, stables, an office, or a meeting building.
Has this all been realized by two persons only? Of course not, many people have been involved in their project. But Manil and Rajen had the idea, and their message, and the message was good, as no one would have stepped into their project if the message wasn't attractive and stimulating for others to participate. They did not only plant seeds of trees, flowers, crops or whatever, they also planted the seeds of their personal message into the heart of hundreds of people, into the soul of the children they are taking care of, and into the minds of their staff, local and foreign volunteers and supporters, all willing to do a contribution, because they know that it's good.
This reads like a tribute to Manil and Rajen, and it definitely is. And why not? Aren't they one of those anonymous heroes who probably will never get a statue, or have a street named after their name? it's surely their wish to remain in all modesty behind the curtains, rather than being honored on stage, blinded by the spotlights. But nevertheless, we should cuddle them as precious beings in this world that has become too materialistic and individualistic We can't take the efforts they have made for granted, as a palm-tree takes many years to grow, a deserted piece of land even more to become fertile, and the virgin brains of a child need the right input to get educated and to prepare itself for the future. So that the child will remember the place where it once has collected its first seeds, and how it can keep on watering and fertilizing its inner seeds, to become a beautiful and strong plant.
I am patiently waiting for the book to come...

Martin Vansteenkiste, Belgium
Posted by administrator at 9:58 AM

Last week Ole from Germany visited SEDS. As a free-lance consultant for CDM projects his role was to see if SEDS was ready to organize the CDM project. The prospects of this project are highly anticipated by SEDS as by the communities involved. So his visit was deemed very important.
During his stay on the farm he checked out if the necessary equipment was there for a proper monitoring of the project. Everything was all right in this department. After that came the field visits. Naturally we had to show him what SEDS had already accomplished in 30 years of development experience. This proved to him that we had good rapport with the communities where we would be building the biogas units. After this we showed him some villages and introduced him to the people who will become the owners of these biogas units. During the meetings Ole asked some questions regarding the possible benefits of the project for the people. The women were adamant that a lot of time and money (e.g. rent for an ox cart to carry the wood) would be saved. When asked what they will do with the extra time and money, the women replied that they will invest it in their children. On the question if only the richer families would benefit from the project - at least one cow/buffalo is needed for the working of the biogas unit - they answered that especially the middle class farmers will install the biogas units because the wealthier farmers already have the economic power to purchase normal gas tanks.
The results of the visits proved to be very positive. Ole was convinced that SEDS could take on the project. 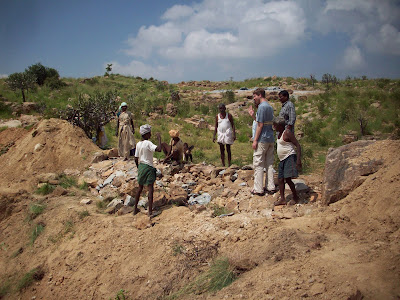 A visit to a watershed construction 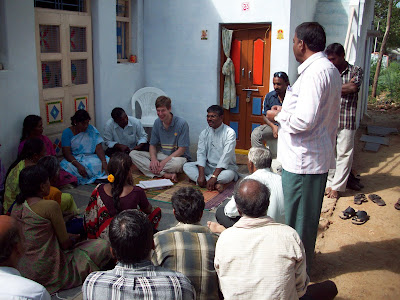 A CDM meeting in Thurukalapatnam

The significance of his visit should be seen in the broader light of the NGO-financing. The time that development NGO’s can solely survive on gifts and donations is becoming more difficult. Donors are becoming more demanding without understanding individual visions of NGO’s who are living organisms .This gives a lot of organizations insecurity in funding. Alternate resources are thus needed to keep the projects going and the CDM project is one of them. As a substitute of simply being handed over the money, SEDS gets money to invest in the building of biogas units. These units will reduce the CO2 emissions. Reducing the carbon footprint will help in combating the effects of climate change. In stead of burning wood the people will now be able to use biogas for their cooking. Next to the obvious advantages for the families there will also be the carbon credits. This is money coming from countries that have to pay for their excess CO2 emissions, according to the Kyoto protocol. The first seven years the larger part of these credits will flow back to the investors with interest. For these investors it is just business as usual. This is no more charity but business with a social character. This is a shift in the NGO-financing. Is SEDS worth investing in or is it better to put the money in the bank?

Posted by administrator at 3:57 PM